Video of the 2020 conference
Monday, 05 July 2021 14:54
Popular:
The BioRes training- Sustainable regional supply chains for woody bioenergy was held on April 21st in Belgrade, within the fair: The training was opened by the president of the National Biomass Association SERBIO and manager of the BioRes project in Serbia, Vojislav Milijic, B.S. in Forestry, and the BioRes trainers Boban Jovanović, B.S. in Forestry; Đorđe Marić, B.S. in Forestry,
Heating Plant using wood chips is the best solution: Construction of the new Heating Plant using wood chops is the best solution for the Banja Luka’s citizens in present circumstances, said by deputy major Srđan Amidžić. Selection the strategic partner for raising the Heating Plant, in the City administration they're
Visions of bioenergy - the transfer of local initiatives in Brussels: The last conference of the BioRes project took place on May 11th in Brussels. The event was organized in a premise of the Bavarian representative office in EU, in an exclusive location close to the European Parliament. BIORES decided to organize
BIORES: study tour, training of trainers and the Steering Committee of the project: Between November 29th and December 4th a study tour was held, combined with training of trainers and the Steering Committee of the project. Participants of the study tour were representatives of organizations and companies interested in forming a Biomass logistic and
Trening BioRES - Održivi regionalni lanci snabdevanja drvnim gorivima RENEXPO Western Balkans 2016.: RENEXPO® Western Balkans vas poziva da uzmete učešće na treningu Održivi regionalni lanci snabdevanja drvnim gorivima koji je deo ovogodišnjih aktivnosti na BioRES Projektu koji je finansiran od strane programa EU Horizon 2020. O ovom projektu možete da se informišete na:
Animated footages on the use of biomass and environmental protection: The Chamber of Agriculture and Forestry of Styria (LK Steiermark) published some animated footages on the use of biomass and environmental protection. Take a look!
BIOMASS - potential for growth, November 16th and 17th, 2017: Dear Sir/Madam, The National Biomass Association SERBIO, together with the Assembly of AP Vojvodina and the Assembly of European Regions, is organizing an international conference "Biomass – potential for growth", on November 16th and 17th, 2017 in Novi Sad. We invite you
VAT reduction for pellets and briquettes: According to the Draft Law on Amendments to the Law on Value Added Tax, the trade and import of wood briquettes and pellets are going to be taxed at a special VAT rate of 10%. According to the proposal, which is
BioRes Project introduced on the Agriculture Fair in Novi Sad: The BioRes Project „ Sustainable Regional Supply Chains for Woody Bioenergy“, implemented by SERBIO, was presented on Mai 12th on the International Conference: Promotion of renewable enrgy sources: Biomass in Agriculture.    The presentation of the project can be downloaded here.
Straw instead of gas - Vojvodina plans to build a public storage of agricultural biomass: Provincial Secretariat for Energy and Mineral Resources announced, at the end of August, a public call for the study spatial distribution of dedicated public warehouses of agricultural biomass in the territory of AP Vojvodina, and one of the goals of

Serbia, Croatia and Bulgaria receive Biomass logistic and trade centers – there are already interested investors for our market 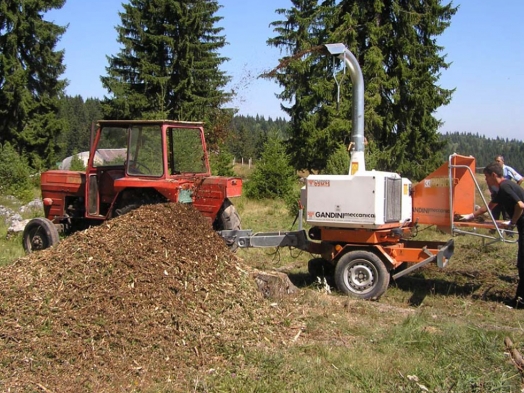 Representatives of the Ministry of Energy, the City of Belgrade and the Embassy of Switzerland, signed, on Monday January 16th, an annex contract for the construction of a combined biomass heating-power plant in Padinska Skela, which has secured additional funding from the Government of Switzerland in the amount of EUR 1.2 million and 500,000 Swiss francs.

Also, at the end of December 2016, the company „Vinex Etil“ announced an investment of 5.8 million euros in the construction of the BIOENERGANA in Lukicevo near Zrenjanin, with the capacity of 2 megawatts. „Bioenergy point“, besides the existing factory for the production of pellets in Boljevac, started the construction of another such facility at the beginning of December, worth around 2 million euros, and a biomass power plant, which is an investment of additional EUR 7 million "heavy".

All these current - announced and already started - investment in biomass and its processing occur at the moment when the project BIORES, which introduces an innovative concept of biomass logistic and trade centers (BLTC) in Serbia, Croatia and Bulgaria, is entering its final phase. The activities, that the National Biomass Association SERBIO conducted in cooperation with international partners from the European Union, began in January 2015 and is planned to complete the project by June 2017.

- Within BIORES project we should achieve three major objectives - to form between six and eight logistics and trade centers for woody biomass in at least two of the three countries (Bulgaria, Croatia and Serbia), as well as to secure contracts for the sale of at least 8,000 tons of wood fuel and purchase adequate quantities of raw materials to produce these fuels. We are still working on these two goals, while the third - the training of 12 trainers who will hold further trainings to those interested in woody biofuels supply chains, as well as the presence of at least 400 participants in these trainings, is carried out - said in an interview for eKapija Vojislav Milijić, vice president of the National Biomass Association SERBIO and BIORES project manager for Serbia.

According to him, these centers should have optimized organization of trade and logistics, they shall be traded in different products based on biomass, and therefore it was important that they fulfilled some of the most important criteria: that the location has the necessary potential and resources, that the local administration is interested to contribute, that there are some interested private investors, and that there are consumer awareness and demand on the market. In these three countries were 15 such locations recognized, six of which in Serbia.

- There are already potential investors in Serbia, and we are currently working on two logistic and trade centers. Basically it comes to brownfield investments where there is already a basic infrastructure. In some cases, there is a lot of equipment, and it is necessary to adapt the space and purchase additional parts of machines. The amount of the investment depends mainly on the baseline, so in some logistic centers in Austria the investment was lower than 500,000 EUR, while in some centers in Germany there was several million euros invested - said Milijić.

When it comes to the provision of raw materials, the interlocutor of eKapija says that the demand for wood is big and that the forest owners and users are interested in cooperation, but their interest is "to create additional value and achieve better price."

- Selling quality wood fuel is something that will increasingly gain in importance in the future, and the importance of renewable energy sources, biomass in particular, has been recognized by representatives of the state. There is willingness for concrete support, that we have already received from the Ministry of Agriculture, and local governments - said Vojislav Milijić, adding that the project BIORES will employ large numbers of people, both at the logistic and trade centers, and indirectly, by engaging in the supply of wood , production and transport.

As for the potential of biomass as a resource in Serbia, our interlocutor explains that it depends on the type of biomass. If we are talking about agricultural biomass, Vojvodina is certainly the leading, primarily Backa. When it comes to the opportunities for energy plantations, there are good potentials in Banat, while in Srem there is a presence of agricultural as well as woody biomass.

With him agrees the Agroeconomic analyst Milan Prostran, which states that the annual capacity of biomass in Serbia is about 3.5 million tons, of which about 2 million in Vojvodina and 1.5 million tons in central Serbia.

- The potential is obvious, but still insignificantly used, because about this type of energy is seriously spoken only in the past decade. I think that the country has not yet sufficiently recognized the importance of biomass, which can be used for heating greenhouses, which would extend the season to the entire year - says Prostran in the interview for eKapija.

He points out that in Vojvodina the biomass is most present, which is generated from residues after harvest, or grain harvest, and recalls that numerous projects have already started, and that there are a briquette plant and insulation panels, which successfully operate.

It is necessary to develop the domestic market

Vojislav Milijić notes that woody biomass has significant potential in eastern, southern and western Serbia, but also draws attention to the complexity of raw materials, because we have to bear in mind the consumers. According to him, where there is potential, there are often no consumers, and the long distance transport - is not always cost-effective.

When it comes to placing biomass on the market, that also depends on the product. By wood pellets, after many years of dominance in export, there was a significant increase in demand in the domestic market. Wood chips has still a limited demand in the domestic market, while the demand for firewood is constantly growing, because it is used by households and producers of pellets and plywood. The demand for straw is still limited, but it is increasing.

- I think we certainly need to work on developing the domestic market, because if we strive for energy independence, we should not export biomass, which we will then compensate by importing fossil fuels - believes Vojislav Milijić.

He concludes that the project BIORES contributes to the promotion of renewable energy, but its aim is primarily to draw attention to the economic effects of use of woody biofuels and present models and ways to use them as an environmentally friendly, sustainable and cost-effective fuel. 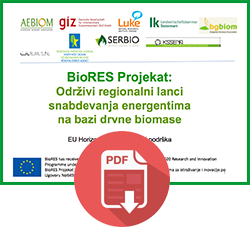 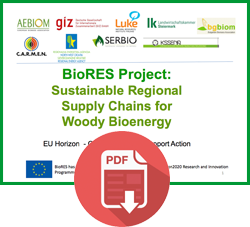