This is the world's first high-altitude floating solar farm, perched like a raft atop Lac des Toules, a man-made reservoir near the village of Bourg-Saint-Pierre in the canton of Valais near the Swiss–Italian border. It is a one-of-a-kind power plant, installed in December 2019 by Romande Energie, the main supplier of electricity in French-speaking Switzerland. "We came up with the idea in 2012 over a coffee," recalls Guillaume Fuchs, project lead in wind and floating solar plants at Romande Energie. "We were thinking about ways we could use dams to produce more electricity. First we considered wind power but there were too many constraints. So then we looked into a project with floating solar panels." 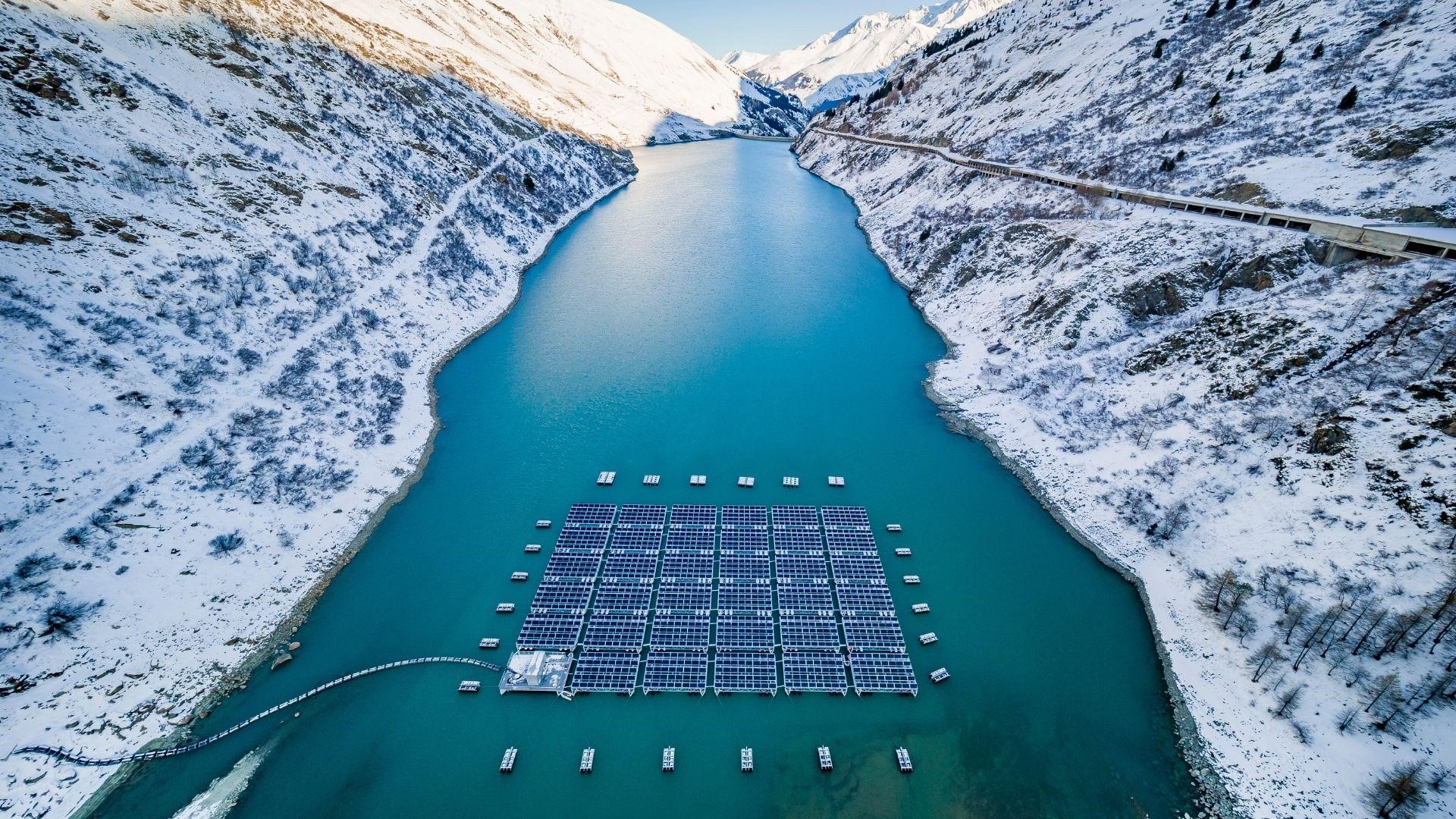 How does it work?

The solar plant at Lac des Toules consists of 1,400 panels, laid on 36 floating structures made of aluminium and polyethylene plastic anchored to the bottom of the lake. Current production exceeds 800,000 kilowatt hours (kWh) per year, which is the equivalent of consumption for about 220 households.

Despite a considerable up-front investment of CHF2.35 million ($2.6 million) – more than what a similar installation on dry land would cost, thanks to extra costs associated with rafts and anchors – a photovoltaic installation on a man-made lake at a high altitude has several advantages.

"The atmosphere is a bit thinner and so UV rays are more intense,” Fuchs explains. “The panels are actually more effective at low temperatures, and we can even use the reflected light from the snow."

Using two-sided panels, which are fitted with photovoltaic cells both front and back, means they can also use light reflected from the surface of the water, which adds to the electrical yield.

"Compared to an installation of the same dimensions down in the valley, we produce about 50% more electricity up here," he points out. 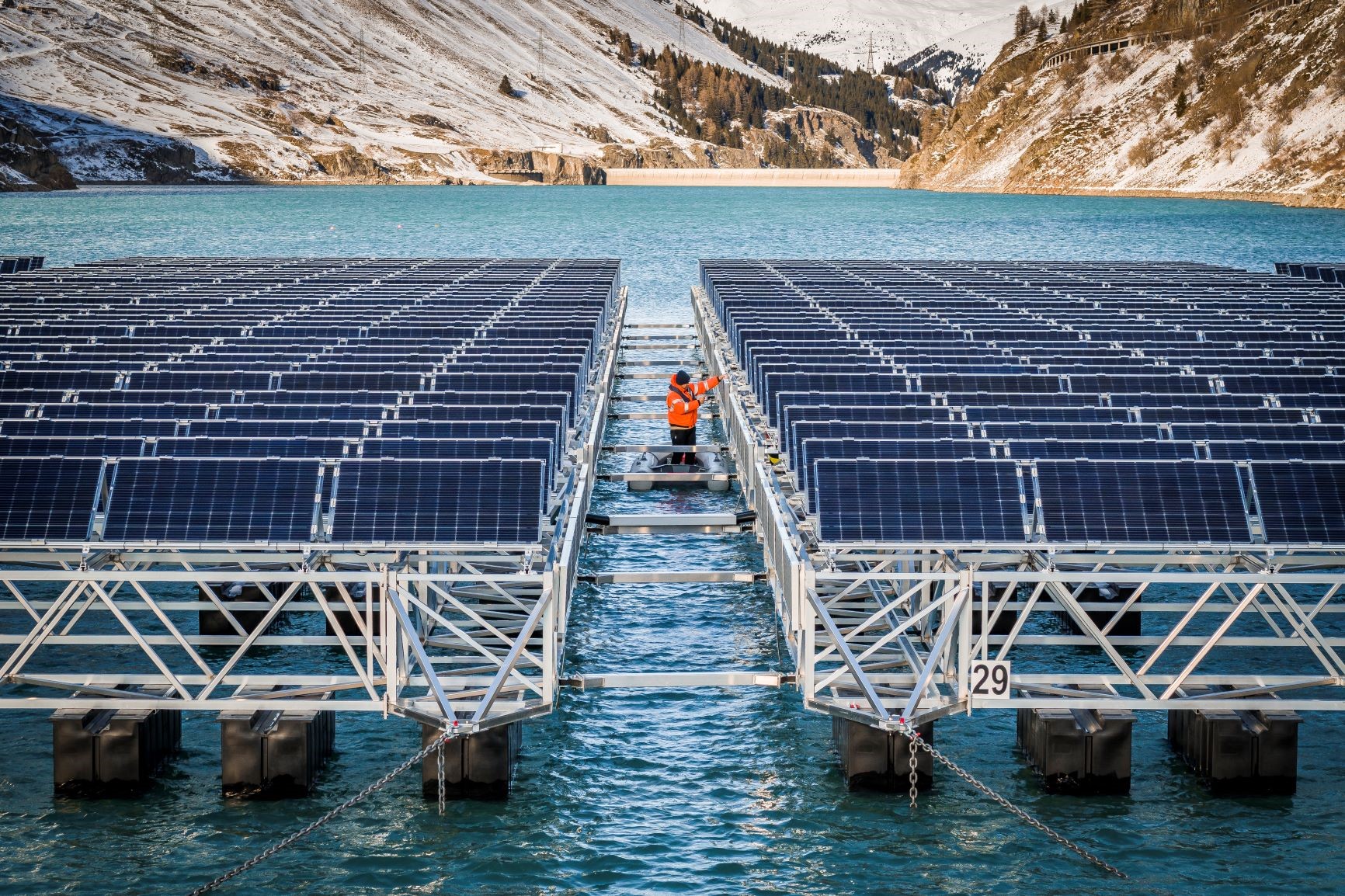 Resistant to snow and ice

Beginning operation in December 2019, the solar power plant in the Alps got through its first winter successfully, Fuchs says. The problem with ice, which can be as thick as 60cm on the lake, was resolved using floats, which raise the structure whenever the surface of the water freezes over. When the lake is completely emptied at the end of March, the platforms come to rest on the bottom, which is flattened out.

The structure can sustain up to 50cm of snow. If the snowfall is heavier, the snow slips off the panels as soon as the sun begins to shine.

The back of the panel is what produces electricity,” Fuchs explains. “So they warm up, and the snow just slips off. After doing several tests we came to the conclusion that a slope of 37° on the panels would be enough to get the snow off, without compromising the efficiency of the photovoltaic cells."

Three factors come together to enable this high-altitude solar farm to produce up to 50% more energy than one on low-lying land: the cold temperatures, stronger UV rays, and light reflected from the surrounding snow. Photovoltaic cells are more efficient in cold weather, as Fuchs points out. Söderström also highlights the potential of this choice of location for generating power, especially in winter: "There is much less fog at an altitude of 1,810 metres than lower down. And the snow reflects the sunlight, so the panels can harness more energy – a phenomenon known as the albedo effect." The use of two-sided modules is very effective here because, when snow lands on a panel, the light reflected from one side heats up the other side by generating energy, causing the snow to slide off.

The overall effect of this Alpine environment is a higher energy yield, particularly in the winter months. It was thus a bold but winning decision. Söderström points out: "There is nothing new or exceptional about floating solar farms, and there are many examples around the world, but this is the first one that has to withstand the harsh climatic conditions of an Alpine winter. It stands as both an addition and a testament to Swiss expertise." According to SFOE figures, electricity from renewable sources accounted for around 75% of Switzerland's electricity consumption and 62% of electricity production in 2019.
This world-first project is drawing much interest from electricity companies around the world and has even become a tourist attraction in the region. "We are in contact with other electricity suppliers in Switzerland and Europe with a view to exporting our technology," says Fuchs. The mayor of Bourg-Saint-Pierre, Gilbert Tornare, adds: "Here at the end of the valley, we live off what few natural resources we have – sunshine, water and wind. So we welcomed this project with great interest and enthusiasm. And we get quite a few tourists coming to look at our floating solar farm. This project is good for our energy independence – but also for our economic survival as a region."

The first floating solar installation was built in 2007 in Japan, and it was followed by projects in other countries, including France, Italy, South Korea, Spain and the United States. Currently, more than a hundred floating plants are operating around the world and the capacity has been increasing since 2014.

The panels can be placed on all kinds of bodies of water, from the industrial (disused mines) to the open sea. The world’s biggest installation of this kind is now in Anhui province, China, while the biggest one in Europe is in Piolenc, in the south of France (with 47,000 photovoltaic panels).

According to players in the sector, floating stations are really the future of solar power because the water cools the panels, increasing their yield. Furthermore, they resolve the issue of land use because they don’t take away any space from agriculture or construction.

This kind of solar power is likely to expand in many parts of the world, according to from the Solar Energy Research Institute of Singapore and the World Bank. 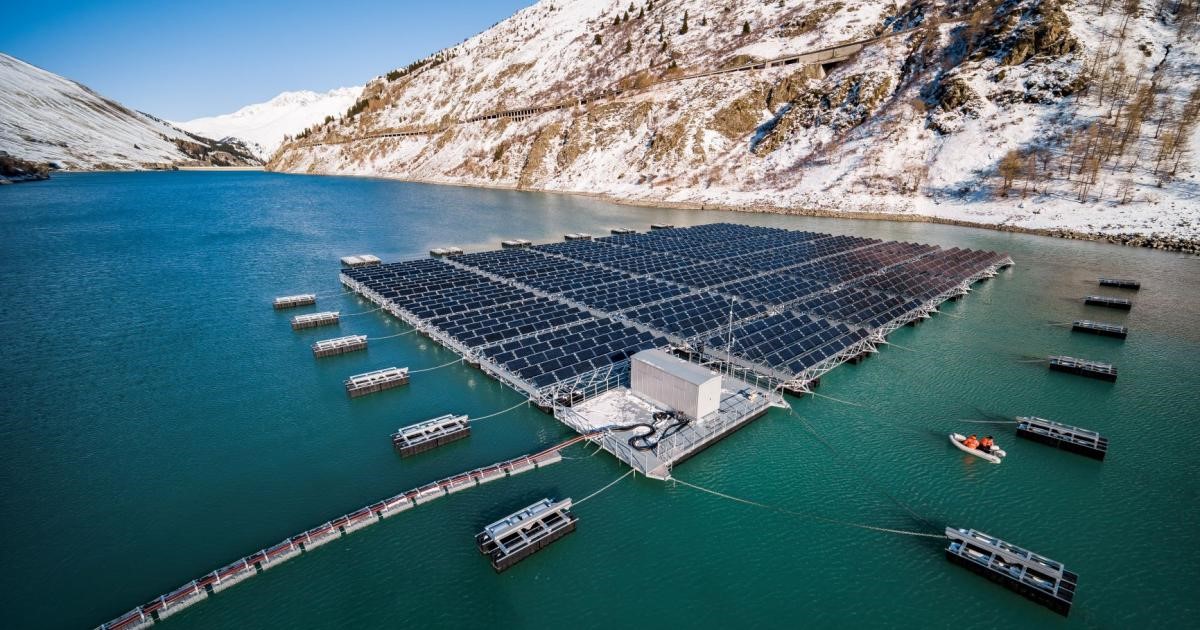 The Lac des Toules solar project has cost CHF 2.35 million to date. It currently produces 800,000 kWh of electricity per year, which is enough to power 220 households. In recognition of its pioneering technology, Romande Energie was awarded the SFOE's 2021  Watt d'Or in the Renewable Energy category. However, the current structure – while efficient – is still only a demonstration project. As Fuchs reveals, Romande Energie has much bigger plans for the future, with a larger and more permanent structure to be built on the same lake in 2022: "The goal is to produce 22 million kWh per year, enough power for some 6,100 households." Romande Energie hopes to obtain planning permission for its new system in early 2021.